Night observation is very different from observation during daylight. At night we rely on our sense of hearing combined with sight and artificial light to locate animals. Nocturnal animals have acute senses compared to us and they are usually aware of our presence long before we detect them. Often I find an animal by its call or the noise it makes as it moves, then I locate it by it's eye-shine.

Vision is a complex sense which involves the brain interpreting signals received from the light sensitive rod and cone cells in the retina at the back of the eye. Cones are fully active in bright light and rods only work in very dim light. Diurnal animals including humans have cone dominated vision which enables excellent colour perception in daylight with high visual acuity . Most nocturnal species have eyes with a greater proportion of rods, which makes for enhanced vision at night. Nocturnal predators also have a number of physical adaptations to collect more light at night, including larger eyes having a short focal length, wide aperture and often a reflective tapetum lucidium which allows light to pass twice through the retina and which gives foxes and cats their bright 'eye-shine'.

Daylight vision  (Photopic vision) - The eye contains several cone types, each having a peak sensitivity to a different light wavelength. The brain 'sees' colour; not the eyes and it does so by interpreting the signal from each cone type, analogous to mixing the primary colours to achieve all the colours of the rainbow. In bright light it is generally believed that the more cone types a species has, the better is its ability to distinguish colours. Mammals have either two or three cone types whilst birds, reptiles and fish have at least four, which probably enables superior colour perception and the ability to see into the ultraviolet part of the spectrum.

The graph below shows the spectral colour sensitivity of the rods and cones in the human eye. The cones types are referred to  as 'L', 'M, and 'S' , referring to long, medium, and short wavelengths, respectively.

Night-time vision (Scotopic vision) - In very dim light cone cells don't function and the brain processes the signals it receives from the rod cells. As there is only one type of rod cell, the brain cannot use the rods to perceive colour, which is the reason why we can't see the true colours of objects illuminated by the stars or the moon. The image below is of a set of children's crayons photographed in starlight (15 seconds, f1.8, ISO 9000), showing that unlike us, the digital camera sees colour perfectly even when we perceive only shades of grey. 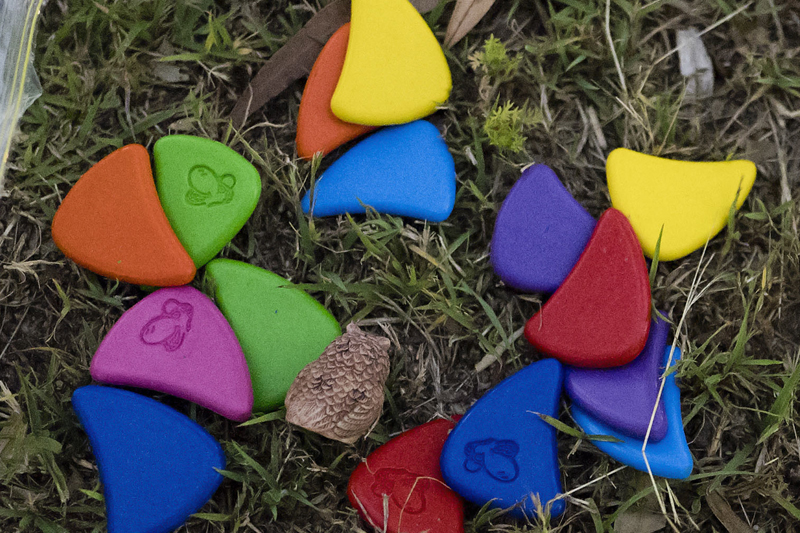 In the majority of vertebrates, rod cells have a peak spectral sensitivity at approximately 500nm (dotted curve in graph above) and are completely insensitive to red light. Consequently you can observe many nocturnal species illuminated using dim red light without visual disturbance. Different species see red light to varying degrees and nearly all can see a red light if they look directly at it because their retinas do contain low concentrations of red sensitive L-cones.

Twilight vision (Mesopic vision) - Twilight is the period between night and day when the sun is below the horizon and during this time both the rods and cones are active. Colours appear muted compared to the colours we see during the day. If you sit in your garden after sunset you will notice, the colours around you start to disappear as the cones slowly switch off. The longer wavelengths such as red disappear faster than the shorter wavelengths and this is known as the 'Purkinje effect'.

The fact that the brain interprets the signals from our eyes and sees colour can result in optical illusions and incorrect colour perception. Moonlight is reflected sunlight having a colour temperature of approximately 4000K, yet our eyes perceive only shades of grey or blue as depicted in cinema movies. Night scenes photographed with a digital camera with a white-balance set to daylight, show a full range of colour with a strong yellow cast.

High intensity flashlights are great for finding animals at night but are not well suited for studying their behaviour. White light has the advantage that you can see the true colours including the colour of an animal's eye-shine, which is a useful aid to rapid identification. The photo below shows the distinctive blue eye-shine of a Mouse deer in my hotel grounds in Sabah, Borneo. 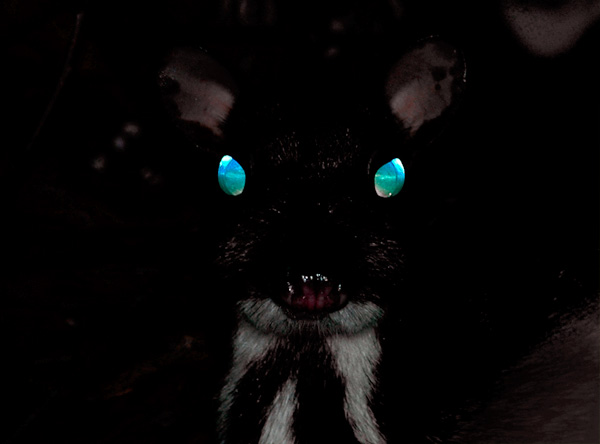 Bright white light directed into the eyes of an animal may cause temporary night blindness lasting at least 10 minutes, during which time the animal could become susceptible to predation or injury. Rods don't see red, and cones have poor sensitivity to red light which means that red LED headlamps such as the one below are ideal for observing animal behaviour. This headlamp can be attached to a tripod and the beam angle can be adjusted to control the brightness. The main disadvantage of a red light is that everything appears red and the true colours cannot be discerned. 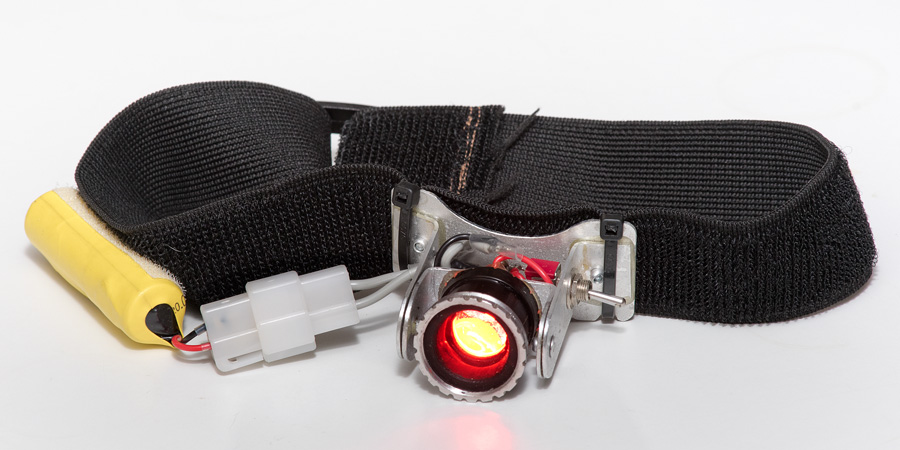 The photo below is of a Powerful owl bringing a freshly killed Ringtail possum to it's nest and was taken using the headlamp above (1/3 second exposure, f6.3, ISO 6400). I observed this  nest for many years using red light and the owls were always aware of my presence but were unconcerned. If a bright white light was used I would not have been able to observe this behaviour and the owls may have abandoned the nest. 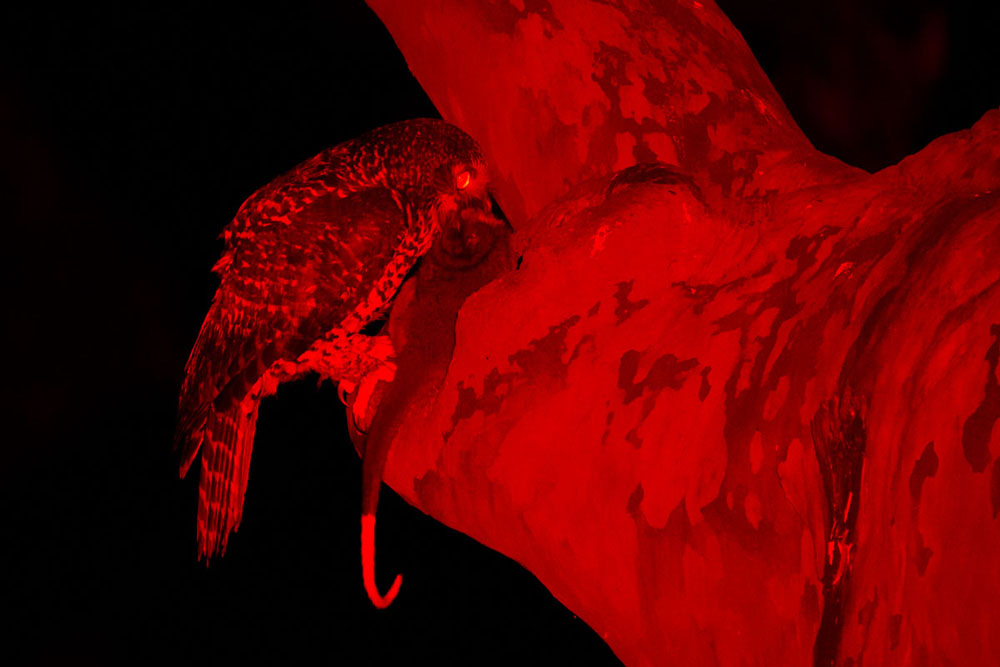 Many birds and mammals can be attracted by playing their calls and sometimes the call of other species. Recordings of calls are often used for owl surveys, by bird watchers (twitchers) and photographers. I use owl calls when looking for owls at new locations. Call playback can be highly disruptive if not used judiciously and I do not encourage it's indiscriminate usage. Playback should be avoided near nest sites during the breeding season. You should resist the temptation of divulging owl locations to photographers and twitchers because owls are strongly territorial and may be subject to excessive disturbance.

Long-sleeved shirt, long pants and sturdy boots afford protection from cuts, scratches and bites when in the bush at night. I prefer walking along defined tracks or roads because you can move quietly and are likely to see more animals. Depending on the weather, I may take extra clothing, food, water, bug repellent, first aid kit and something to sit on. Unnecessary gear however, can turn a casual walk into a slog so I try to carry only the essentials.

Being by yourself at night can be very rewarding and you usually see more animals because your senses are heightened, however you need to be better prepared. In the dark your vision and sense of direction is poor and it is easy to become disoriented or trip on something you didn't notice. Before I venture out alone I familiarise my route and tell someone where I am going and when I expect to return.