I have enjoyed photographing night creatures for over 30 years and my ideas and equipment have continually evolved. With the rapid advancement in camera technology and the advent of LED illumination it is now possible to photograph birds flying at night. This trend will continue and the techniques and equipment I use today will quickly become outdated. For those interested in this type of photography the additional equipment that is needed can be as simple as a decent spotlight and an assistant or as complex as you wish. These are my thoughts and techniques as of September 2019, which I hope will provide insight and tempt you to venture out at night and enjoy your photography in a different light.

Photography in darkness requires the use of artificial light in the form of either a continuous light source or electronic flash. There are several important differences between daylight and light sources which the experienced night photographer understands.

A fundamental characteristic of light is that the brightness of an object, decreases in proportion to the square of the object distance from the light source. The diagram below shows that if an object is located at "d" it would be four times brighter than if it was located at "2d". Each time the distance to the light source is doubled, the correct exposure needs to be increased by the equivalent of two f-stops. Likewise, if the distance is halved the exposure needs to be reduced by the equivalent of two f-stops.

For outdoor photography during daylight, the sun is so far away from planet Earth that the brightness of any object due to its distance from the sun is essentially the same and can be ignored. However, a hypothetical photographer on planet Jupiter which is 5 times further away from the sun, would need to increase the exposure by 25 f-stops! 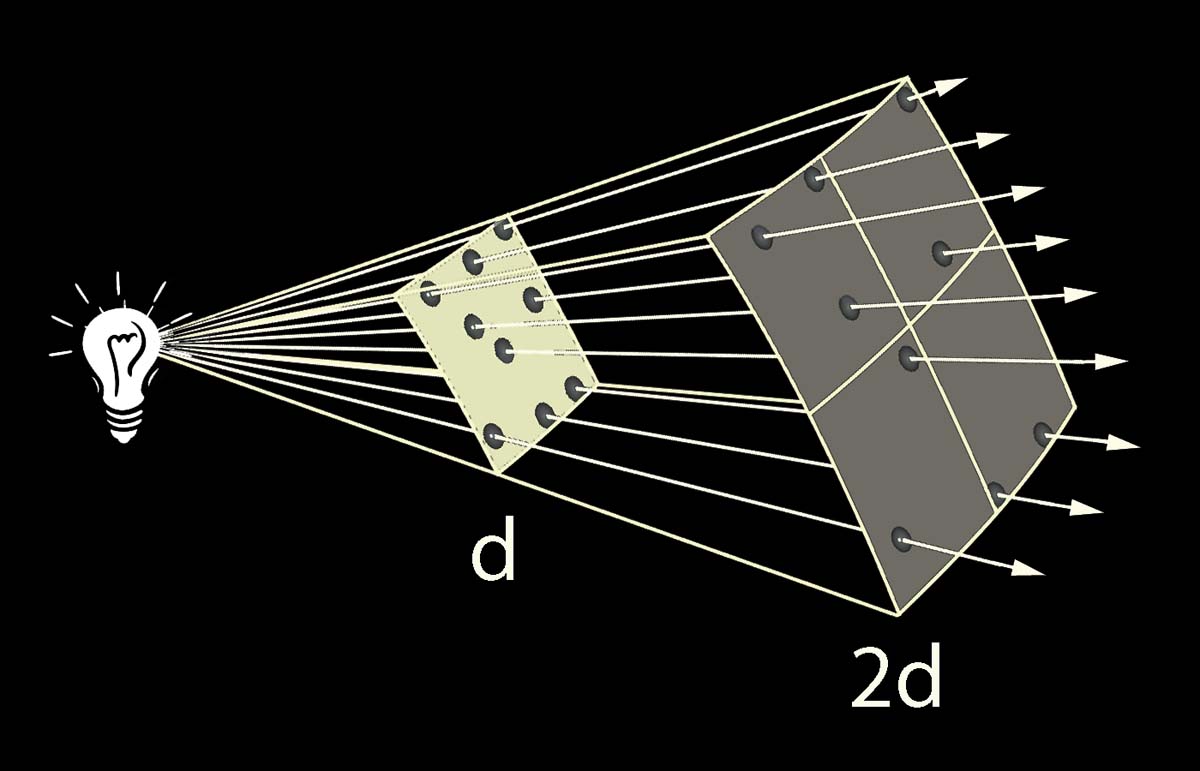 Continuous light sources  - such as spotlights are great for photographing animals that are stationary. Filament and Xenon arc lamps produce light of good colour quality but are power hungry and heavy by today's standards. LED lights are portable, bright and energy efficient  but most produce white light of  poor colour quality. Lights having  high quality white LED's (high CRI) are now becoming available at lower cost.

Exposure is determined using the camera metering system by adjusting shutter speed, aperture and ISO. The Tawny Frogmouth below, was sitting on a post and the car headlights were used for illumination with camera setting of 1/15s, f5.3 and 9,000 ISO.

Electronic flash - the ideal portable light source. Flash units contain complex electronics that produce an electrical discharge inside a transparent tube. When sufficient light has been emitted the discharge is terminated. The flash-tube contains xenon gas which produces intense light having a white balance comparable with midday sunlight. Most models have an auto-mode, however I prefer manual power settings which controls the light output in f-stop increments. 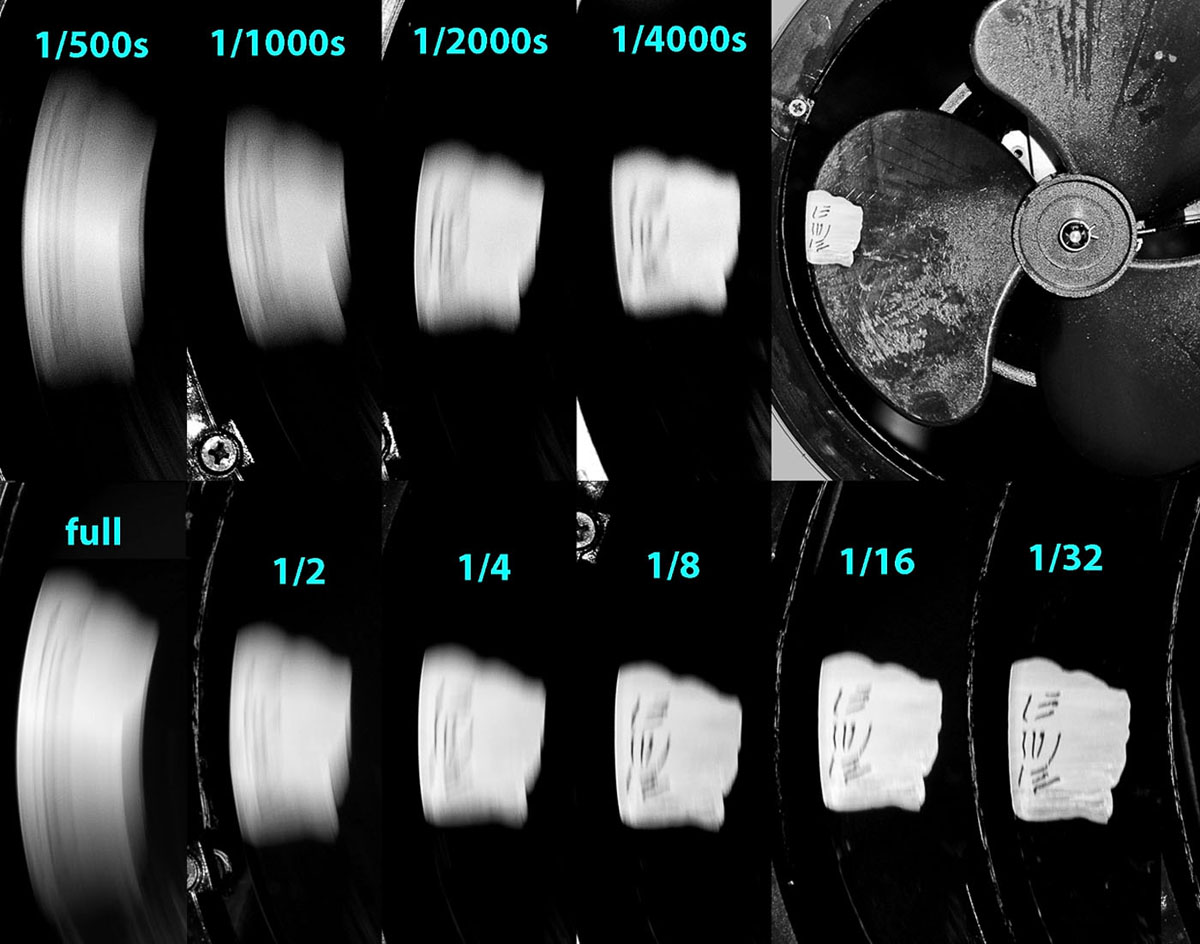 Fresnel lens flash extender - a Fresnel lens placed in front of the flash is a useful aid to a telephoto lens at night. It concentrates the light into a narrow beam, typically providing a 2-3 f-stop gain in brightness. To illustrate this, the images below were taken using a 50mm lens with identical camera/flash settings and image processing. A flash extender produces a major gain in brightness  but is difficult to keep aligned with the field of view through the lens. I use a rigid carbon fibre bracket to counteract this problem.

The various types of focus sensors used in DSLR and mirrorless cameras essentially measure subject contrast. The camera continually adjusts the lens focus until maximum contrast is obtained. Illumination, subject contrast and movement, each affect the camera's ability to focus accurately and quickly and at night, additional illumination is required.

With a continuous light source such as a spotlight, obtaining the correct exposure is straightforward and virtually identical to day-time photography.

Using flash, the task is more difficult. I set the flash mode to manual power, rather than on auto-flash, which often produces disappointing results when used outside at night.

At the commencement of a night outing, I "calibrate" my camera/flash set-up by taking test shots of an object such as a tree trunk, at a "typical" distance. My flash set on 1/4 power, f8 and ISO 800 achieves good range and motion stopping ability at a distance of 10 metres.

For a different distance I adjust the ISO, Aperture and flash power accordingly and where possible take a trial shot.

When working from a car or with an assistant, photography in the dark is straightforward. When alone, simple tasks such as changing camera settings, adjusting gear and lights are difficult and error prone. It is a great help to pre-configure as many settings as possible and have your gear setup before complete darkness falls. My general setup shown below, is based on a rigid carbon fibre bracket which can incorporate a camera mounted via the baseplate (70-300 mm zoom) or the lens-foot (500 mm lens). The focussing lights produce 450 lux at a distance of 10m which makes it possible to photograph birds flying in the dark.

Tripod - A tripod is useful for photographing subjects at fixed locations such as roosts or nests. A small lightweight carbon fibre tripod to support the camera or as a stand for an off-camera flash is ideal.

Slaves and triggers - Occasionally I use off-camera flash triggered by sync. cables or Pocket Wizzard Plus-X radio triggers. Previously I used Nikon's clever inbuilt 'CLS' system which uses line of sight infrared communication between camera and flash. Unfortunately it is time consuming to set up and unreliable in the bush due to  beam path obstructions from unseen objects including leaves and branches.

Settings Banks - Many cameras allow you to save your favourite settings for quick recall. My camera has two banks which I have configured for night use, one for flying birds and the other for stationary subjects. It saves enormous time and frustration being able to select the desired settings by rotating a knob.

Image format - RAW file format has a much higher capacity for correcting white balance and for salvaging great shots which would have be spoilt by over or under exposure if they were created as JPG files.

LCD Monitor - The monitor screen appears very much brighter at night than it does during the day and often, images which look adequately exposed are considerably underexposed. I turn the monitor brightness right down and where possible also check the image histogram to see if the exposure was OK.

Shooting Mode - My camera is always set to manual mode because I always use flash at night.

Focus - For stationary birds I use the centre autofocus point, continuous focus and have the camera set for 'backbutton autofocus'. Backbutton focussing makes it easy to reframe the subject without  refocusing. For flying birds, I use continuous autofocus with multiple focus points selected and use the shutter release button to focus and shoot. Camera brands and models have a multitude of focus modes and I am not sufficiently knowledgeable to expound on which ones are optimal.

ISO - Producing sufficient light to properly expose the image or to obtain a 'motion-free' image can be difficult. Using high ISO is equivalent to using a more powerful flash unit, however the downside is that it also increases image noise. ISO 800 produces an acceptable level of image noise on my camera (Nikon D750) and I use it as my go-to night setting.

Aperture - Using a wide aperture is desirable to isolate the subject from the background and increase the maximum working range of the flash. The downside is that accurate focus is critical and some lenses are softer at their widest aperture.

Shutter - When using a camera with focal plane shutter, the maximum shutter speed should be set no higher than the maximum flash sync speed, which is around 1/200s for most models. At night, the surrounds are dark and it is the short duration of the pulse of light from the flash which stops motion, not the shutter speed.

Slow shutter speeds, however, can be useful for stationary subjects to record ambient light detail as shown for the Barking owl below, which was taken at 1/15s. The owl remained sharp because it was exposed by flash, whilst the background shows some effects of camera movement. 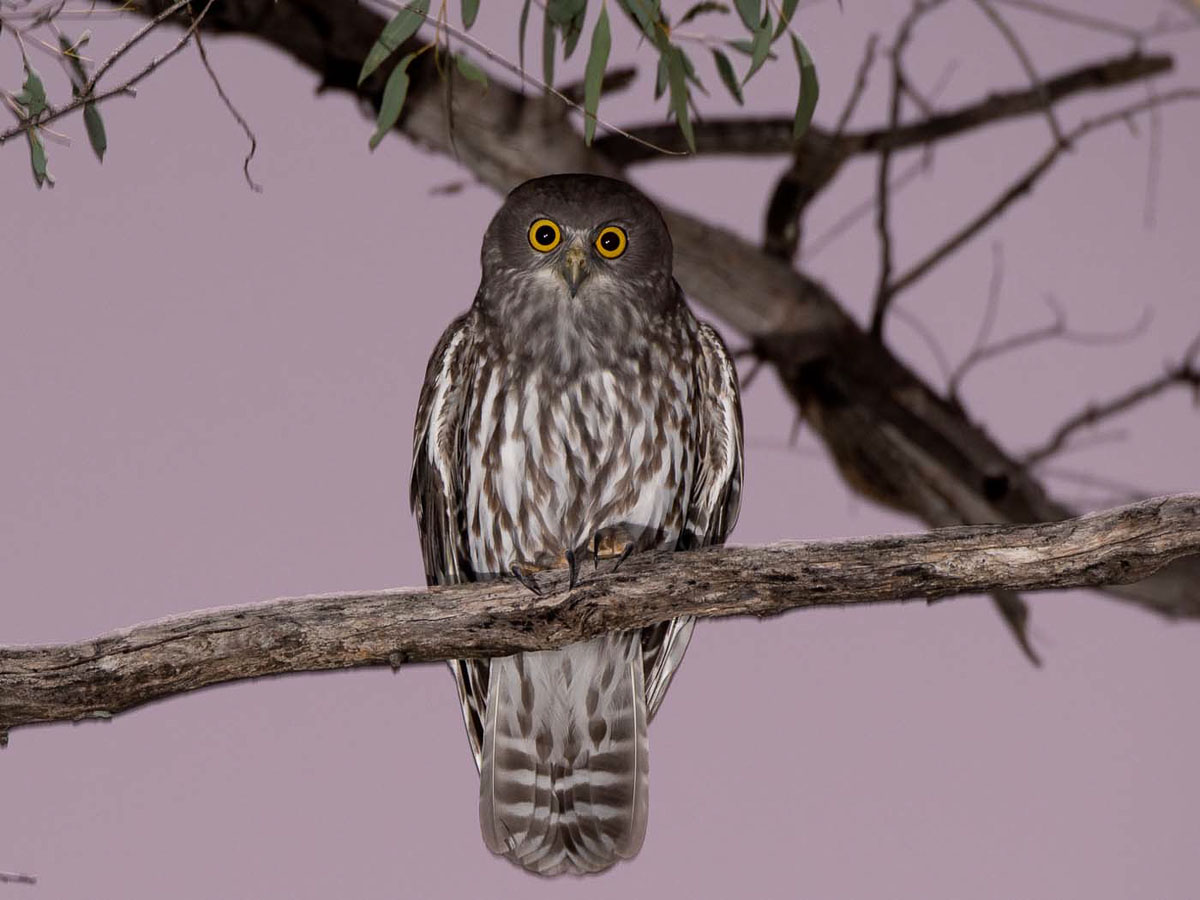 Flash in conjunction with a low shutter speed can be intentionally combined to give the appearance of motion as shown for the Nightjar below. A sharp image of the bird was produced by the short duration of the flash and the blurred trail resulted from the 1/30s shutter speed exposure from the focussing light. By setting the camera flash mode to 'rear-curtain sync',  the blurr can be made to trail the bird to give the impression of speed.

More often than not though, an otherwise good images of difficult to photograph  subjects, such as the Grass owl below, are ruined. 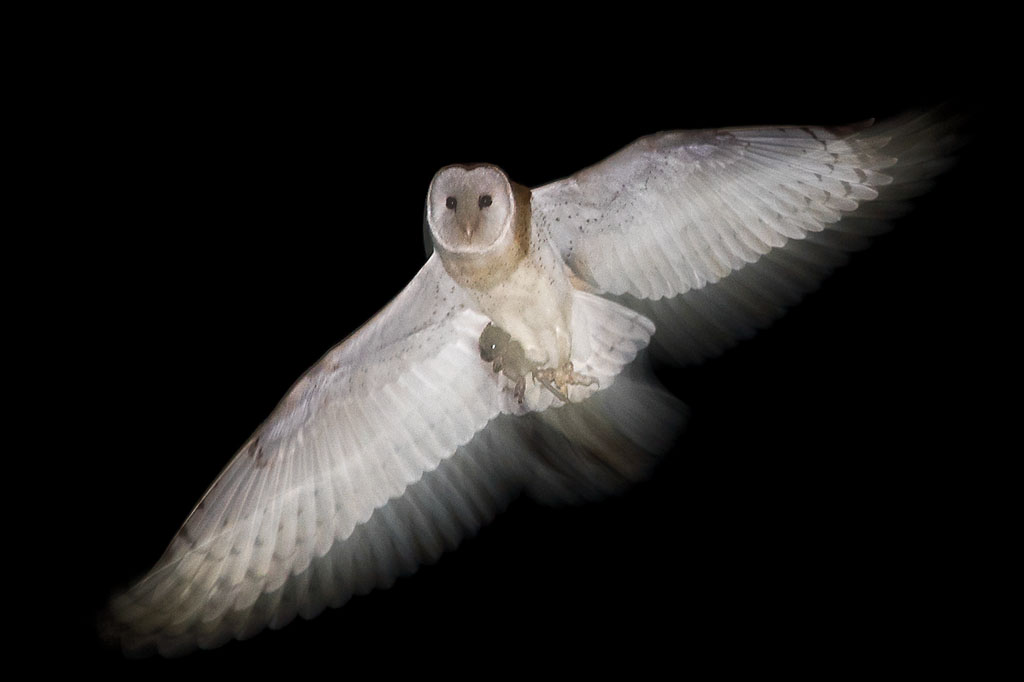 Pupils - Unfortunately, a continuous light always produces contracted pupils when the bird is looking toward it and this is especially noticeable with birds having a light coloured iris as is apparent for the young Boobook owl below on the left. Large eyes are a prominent feature of nocturnal birds and if we were able see in the dark we would realise that their pupils are always wide open as for the adult Boobook below on the right. To me, dilated pupils look more natural and can be captured by pre-focusing and turning off the focusing light several seconds before releasing the shutter. 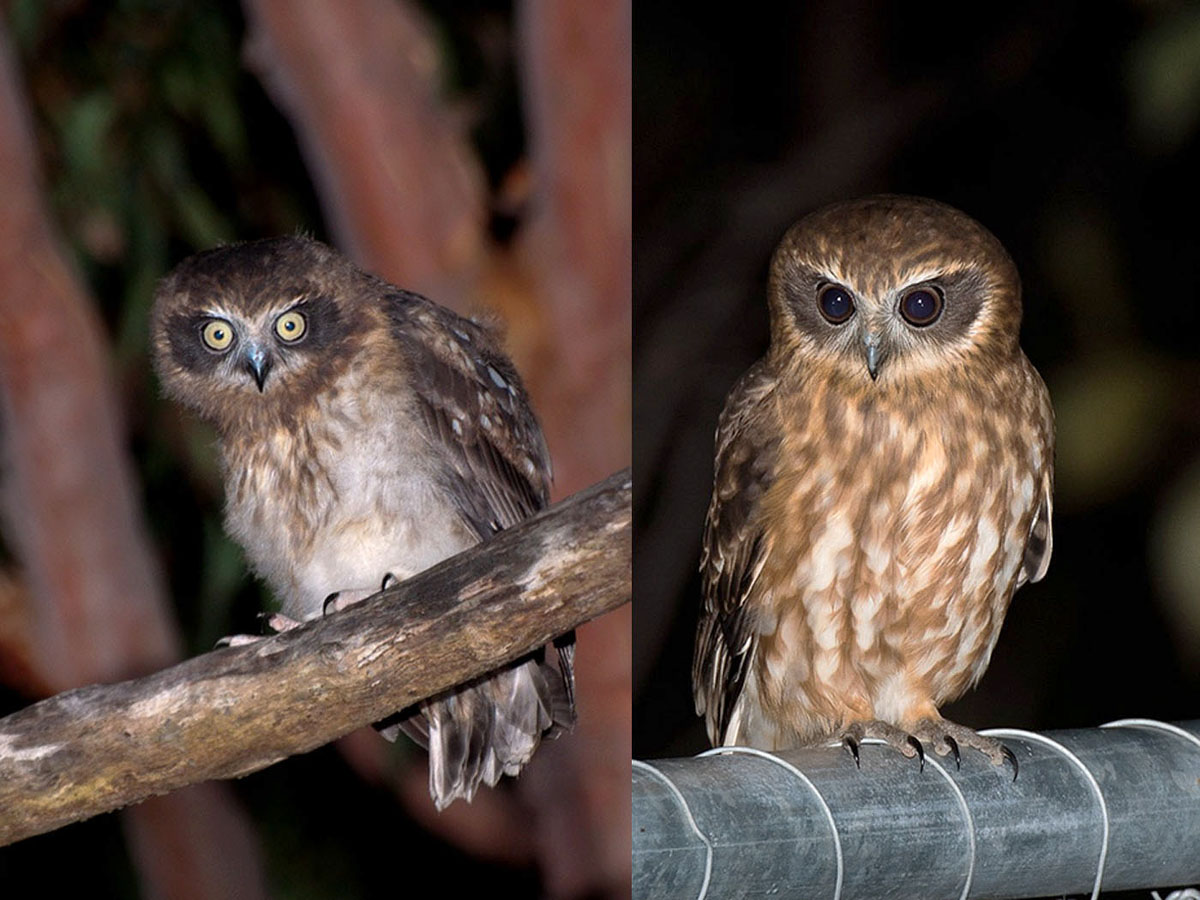 Red-eye occurs when the light source is located close to the camera and light is reflected from the retina into the lens. By moving the light source away from the camera or moving closer to the subject red-eye can be avoided or greatly reduced. This is shown in the diagrams below and in the images of a Tasmanian Boobook owl, taken at different distances and head angles. Increasing the angle can be achieved via a camera bracket or using off-camera flash. When red-eye cannot be avoided it can sometimes be removed by skillful photo editing, however, photos with red-eye often lack feather texture due to the flat shadowless illumination associated with a narrow flash angle. 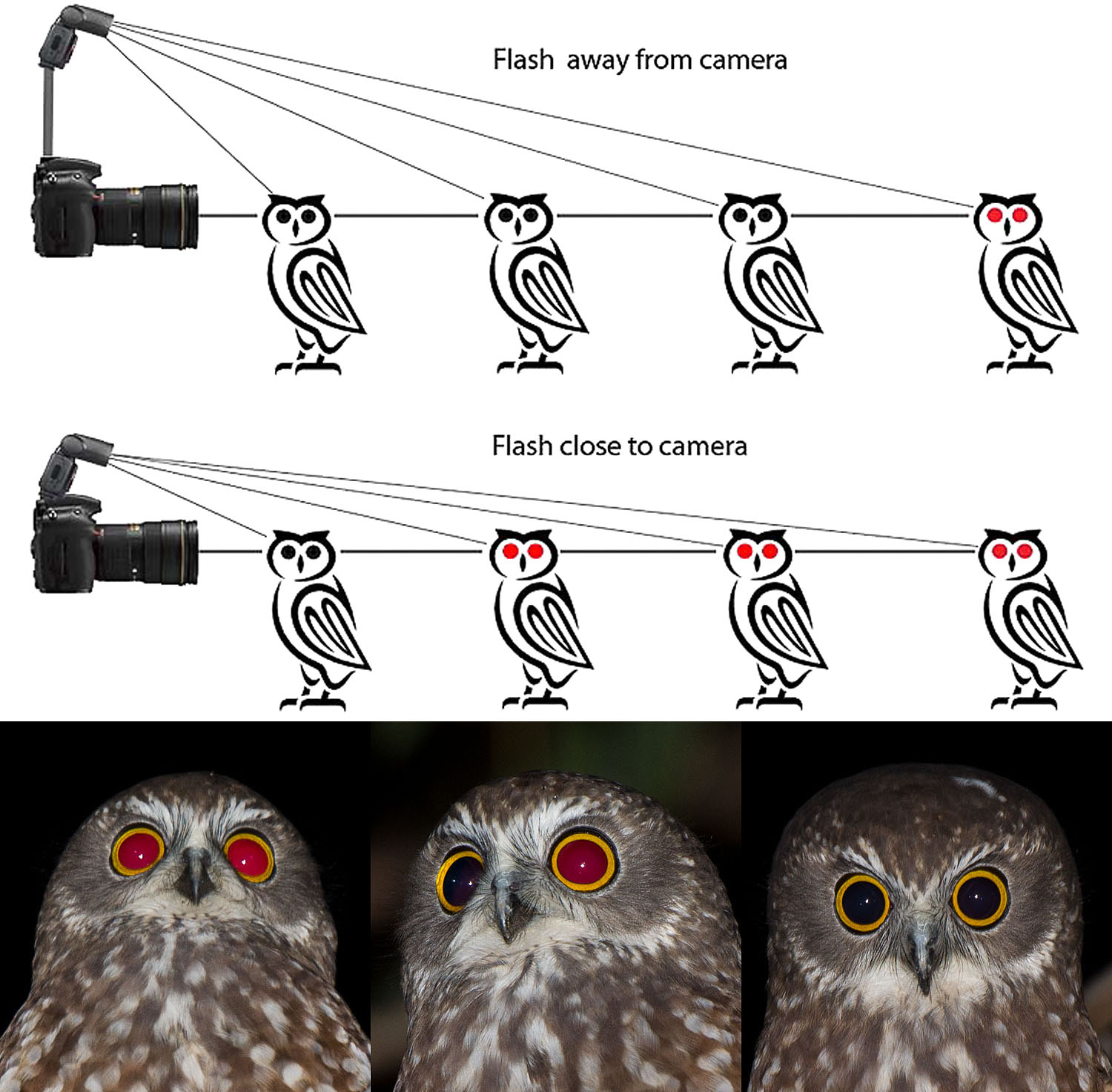 Sometimes you cannot avoid red-eye as seen in the left and centre images above, however red-eye can often be 'fixed' by careful photo-editing. Pupils almost always have some light and colour, so I prefer to darken them by 'burning' the shadows and mid-tones, then desaturating the colour until they are almost black. You can also 'dodge' the catchlights and eye reflections to enhance their appearance as shown for the same images below.

Flying birds present the ultimate challenge. Quality images can be obtained by shooting a bird leaving or arriving at a pre-focused perch or by achieving focus in flight. The Tawny frogmouth below was taken by pre-focusing on the perch it was using and by watching it with a dim red light until it flew. The Grass owl was focused in flight using a camera bracket with high intensity focus lights. 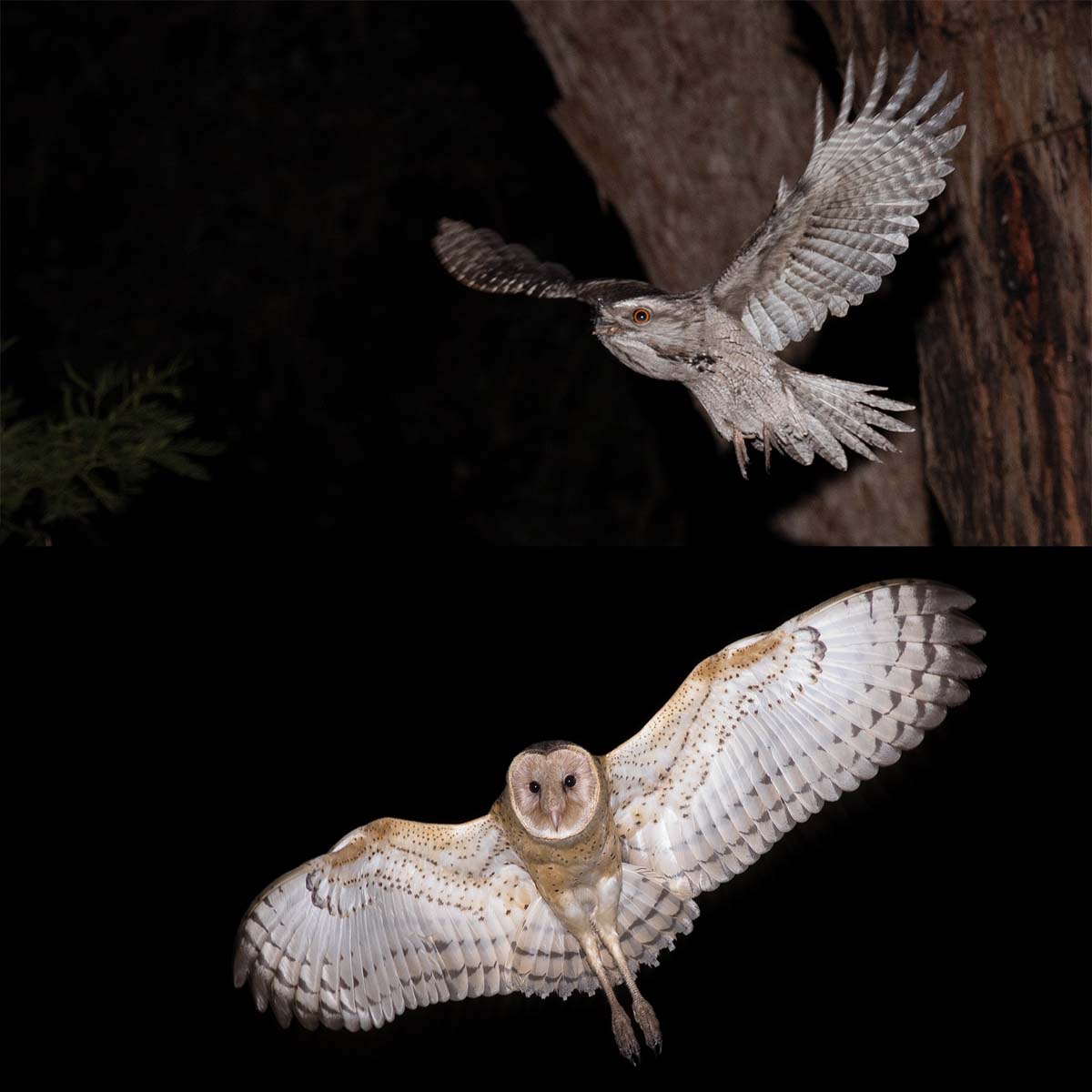 My thoughts and ideas should be viewed as a guide for those interested in night photography. They should not be considered as binding, rather as ideas and techniques that have worked for me. I hope this article can assist you in developing yours night photography skills and encourage you to give it a go.